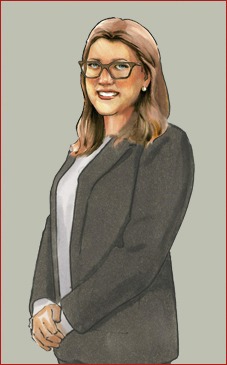 Emily E. Schnidt has been practicing almost exclusively in the areas of civil rights and employment law since she was licensed in 2009.  Through her career, Emily has represented police officers and municipalities against federal and state law claims of excessive force, false arrest, due process violations, reverse conviction, deliberate indifference to medical needs, failure to intervene, failure to train and cases brought under Monell.  In the area of employment law, Emily has represented both private and public entities and employees in cases involving claims of discrimination, harassment, retaliation, violations of the Family Medical Leave Act, and those claims brought before various federal and state agencies, such as the Equal Employment Opportunity Commission, the Illinois Department of Human Rights, and the Illinois Department of Labor. Emily is responsible for all aspects of her cases, from initial intake and interview with the named parties and witnesses, through federal and state jury trials.

Prior to becoming an attorney, through law school, Emily worked for a plaintiff’s law firm who litigated civil rights and employment matters. Through that experience, Emily gained a unique perspective and understanding of all sides of a lawsuit and anticipating all arguments made by an opposing party. Emily received her law degree from John Marshall Law School and in 2007 was captain of the Labor & Employment Law Mock Trial team. Emily completed her undergraduate degree at the University of Illinois, Champaign-Urbana and was the Vice President of the University’s mock trial team, where the team won several national competitions.

Emily was recently published in “For the Defense,” a magazine affiliated with the Defense Research Institute: “When an Employer Must Offer an Unrequested Leave of Absence.”